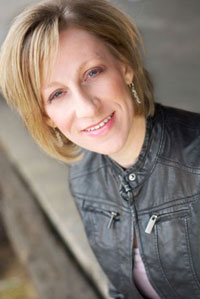 Lisa Paitz Spindler is a science fiction author, web designer, blogger, and pop culture geek. Her debut space opera novella, THE SPIRAL PATH, was released March 28, 2011 from Carina Press. In addition to contributing book reviews and television recaps to SF Signal, she also maintains the Danger Gal Blog hosted by her alter ego, Danger Gal, whose stiletto heels are licensed weapons and whose ninja stars travel faster than light. Lisa, however, gets through each day on caffeine and science blogs. Lisa can also be found on Twitter and Facebook.

THE SPIRAL PATH is lined up on my Kindle and ready to go, so I was thrilled to score an interview with the author.

I remember having the Little Golden Books series, so the first book I ever read was probably “The Poky Little Puppy.” I read all over the spectrum, so the last book I read was Duchess By Night by Eloisa James. I’m currently reading The Empress of Mars by Kage Baker and The Hidden Reality by Brian Greene.

Lisa is a busy reader, as well as a writer. You can catch up with her on Goodreads.

Did you always want to be a writer or was it a realization you came to as an adult?

I’ve been writing for as long as I can remember, but I didn’t have an eye on becoming published until I graduated from college. The year after the job market was terrible and my mother suggested that I use my time to write a novel.

How did you decide on science fiction romance as your genre? Or did it decide on you?

When Empire Strikes Back was released, I was at the prime movie-star crushing age, so the love story between Princess Leia and Han Solo left me wanting more science fiction romance. I was already a science fiction fan at that point having watched all of the available Star Trek from the original series to the early movies. My mother is an avid Romance reader, so about the same time I started picking up whatever she was reading and it all blended together. I didn’t realize it was a distinct subgenre until I discovered Primary Inversion by Catherine Asaro and Shards of Honor by Lois McMaster Bujold.

Oh, that’s a hard question to answer!  My gateway science fiction books were a few by Arthur C. Clarke and the Foundation series by Isaac Asimov. Clarke’s Childhood’s End had a huge impact on me, but so did Catherine Asaro’s Primary Inversion (and the whole Ruby Dynasty series, really). I very much enjoyed Patricia Kennealy-Morrison’s Keltiad series as well.  Some of my favorite romances include just about anything by Laura Kinsale, Suzanne Brockmann, and J.R. Ward.

You’ve been blogging since 2004. What have you found to be the rewards and challenges of blogging?

I had to look that date up for another interview and it’s true. It sure doesn’t feel like it’s been that long. Like any other kind of writing, the most important factor in blogging is the determination to keep at it. When people ask me how they can get into blogging, I tell them to pick a topic they’re passionate about because they’re going to be writing about it almost every day. That’s how you build an audience. I haven’t always lived up to that, but I’ve  certainly tried. Blogging has been so very rewarding because it’s enabled me to meet others who share my geeky interests.

Do you enjoy doing research for your stories? What are some topics you’ve researched recently?

I love research and sometime have to make myself stop in order to actually write. I’m fascinated with how complex the universe is and everything we’re doing to try to understand it better. The premise of The Spiral Path is inter-dimensional travel, so I’ve been researching M-theory and similar topics. Brian Greene’s The Hidden Reality has been a great overview of many of the topics my novel centers around.

If you can catch it, there’s a wonderful show on the Discovery/Science Channel right now called How The Universe Works that explains everything from the Big Bang to black holes with some fantastic CGI.

What’s next for Lisa Paitz Spindler?

I’m working on the sequel to The Spiral Path right now as well as a few other science fiction and paranormal projects. I’m continuing to blog for SF Signal in addition to participating in their weekly podcast. Also, the Danger Gal Blog continues to profile strong heroines in genre fiction.

Thank you very much for your time, Lisa. And here’s hoping you sell many copies of your book. Good luck!

You can buy THE SPIRAL PATH now: 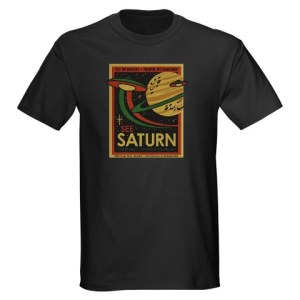 Out Of This World Blog Tour Giveaway

As part of the Out Of This World Blog Tour, Lisa is giving away a copy of THE SPIRAL PATH and this Retro Saturn T-shirt to one lucky reader.

Everyone who enters will receive a door prize: THE SPIRAL PATH electronic trading cards depicting the four main characters in the story. Click here to enter.

On Sunday, April 3 Lisa will draw and announce the winning name on her blog.