The Many Flavors of Horror: An Interview with Nicole LeBoeuf 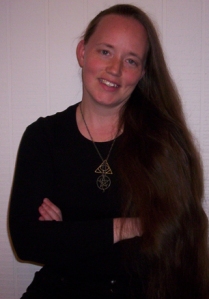 Horror is a many-flavored genre. From slash and gore to the psychological, from goosebumps to terror,  horror can hit us hard in many places.  My guest today takes horror to the realms of the fantastical with a side order of cold, clammy dread. It’s a heady flavor. Please do check out her linked stories below.

Bio: Nicole J. LeBoeuf is, in no particular order: a native New Orleanian and urban Cajun; a graduate of Viable Paradise, the University of Washington, and Metairie Park Country Day School; deeply appreciative of fine teas, cooking experiments, and single-malt scotch; a constant spinner of yarn and knitter of socks; an occasional pilot of rented Cessnas; married with two cats. She lives in Boulder, Colorado, and has recently taken up roller derby.

Dooley: How would you describe your writing?

LeBoeuf: In two words: “Weird stuff.” I love stories that inject an element of the fantastic into the ordinary world. Magic exists, magic ought to exist, and I will damn well make magic exist if the real world isn’t delivering. The fantastic element might be horrific. It might be transcendent. It might be both — that’s when I think it’s the most fantastic of all.

Dooley: Have you any stories available to read for free online?

My most recent online publication is “The Day the Sidewalks Melted” in Ideomancer Volume 9 Issue 1 (February 2010). It’s a very short story about endings, the inevitability of endings, and the gorgeous human drive to deny endings and demand second chances.

Before that, the now-defunct and much-missed Chicago-based publisher Twilight Tales posted my story “Right Door, Wrong Time” to their website. (You can still read it thanks to the Wayback Machine.) They used to run a flash fiction contest at the World Horror Convention every year; this one placed in the 2006 event. I love magic door stories, but I can’t help but think the kids that went to Narnia had it a little easy.

I’ve republished my very first paid sale, “Last Week’s Rhododendron,” to my website. I’m not sure if I’m published enough, or old enough for that matter, to call anything of mine “juvenilia,” but if anything counts, this one does. It’s a satire on the fickleness of trends.

Dooley: What are you working on now?

LaBoeuf: I’ve decided that, after almost a decade of participating in National Novel Writing Month, this will be the year I finally start shopping a novel around. So I’m revising my 2008 effort, Like a Bad Penny, also known as “I swear I’m not ripping off X-Men.” If all goes well, it’ll be a urban fantasy road trip novel featuring sorta-superheroes and the monkey’s paw side of wishes.

Also, because I’m a terrible procrastinator, I’ve got this never-ending backlog of stories that would really like to be finished and sent out to meet the nice people. The ones that will probably reach that point soonest involve 1) yet another magic door, 2) a reluctant Mary Sue who makes fantastic potato salad, 3) an obsessive-compulsive woman who’s haunted by credit card receipts and the angels of a wrathful God. At least, that’s what those three stories involve now. Who knows what they’ll do between the current draft and the finished version.

Dooley: Who are your top three favorite female characters in horror film?

LaBoeuf: That’s a tough one, not least because I don’t watch a lot of horror film. It’s weird — I never considered myself a fan of horror, let alone a writer of it. It took attending World Horror 2002 to realize that “horror” isn’t just schocks-n-guts-n-gore, but rather it’s a mood, it’s a way of apprehending the world, and it’s been working its way into my writing for years. Still, thinking up three horror films I’ve watched, let alone three with awesome female characters, that’s a toughie.

I can think of two for sure. First, Ripley, from the Alien/Aliens movies, with special love for her reprisal of the role in Resurrection because of what that story does to the idea of motherhood. And — you’re going to laugh — Rose Da Silva, the mother character in Silent Hill. She’s so scared, just like I would be in her situation, but she does what she has to do anyway. And, you know, after she does the next scary thing, she’s still scared, because that’s how fear works. Fear doesn’t just magically go away because you faced it. You don’t win by “letting go of fear” — what a horrible, emotionally violent turn of phrase! Like, if I’m scared, it’s my own fault because I didn’t “let go of fear”! — you win by doing what you’ve got to do despite the fear. Which makes Rose so much more personally awesome for me than even the heroines of some vastly superior movies. I mean, even recognizing the hokiness of “Reach into the Toilet of Doom and pull out the McGuffin of Saving Your Daughter!,” damn, she reached in, didn’t she? And then she kept going. I’m not sure I could.

Dooley: What are the last three books you read?

LeBoeuf: Straying From the Path, a gorgeous collection of short stories by Carrie Vaughn. I love Vaughn’s way with a “what if.”

Wildwood, by the writer-and-illustrator husband-wife team Colin Meloy and Carson Ellis. There are lots of stories involving big sisters rescuing baby brothers from a fairyland teeming with talking beasts and fantasy politics, but how many start off in Portland, Oregon? I knew I was in for a treat with Ellis’s fantastic illustrations, but Meloy’s worldbuilding and eye for detail were new pleasures for me. If you can get your hands on a copy, snatch it right up.

Do rereads count? I just reread The Hounds of the Morrigan by Pat O’Shea.  It’s a little like Narnia with a different religion. Two children are caught up in a struggle between the Gods of old Ireland, and they encounter both ordinary creatures as well as heroes of myth and legend. Each character’s voice is pitch-perfect and a tribute to its folkloric origins. It’s one of the most beautiful books ever. That O’Shea published so little in her lifetime is one of the frank injustices of the world.

LeBoeuf: What Neil Gaiman has said to many aspiring authors: something along the lines of, “Write. Finish what you write. Send it out and write something else. It’s that easy, and that difficult.” The first time I heard him say that, I felt let down. No magic bullet. No secret. Just… that? Years later I heard it again, and the self-empowering angle of it clicked for me. It became, “If you want to be a writer, you can be. It’s entirely within your power.”

Dooley: Which writers do you cite as your main influences?

LeBoeuf: Again, Neil Gaiman. His writing does what I want to do with writing: inject weirdness into the world. And his career stands as an example and an inspiration to anyone else who wants to “make a living making things up” — you can’t count on having the sort of lucky breaks he’s had, but if you want to make yourself available for lucky breaks to happen to, you can’t go far wrong with Gaiman as a role model.

I’m a huge fan of Patricia McKillip. Her writing voice, like Peter S. Beagle’s, is lush with poetic detail juxtaposed with mundane observations. Her stories are so often grounded in a domesticity that epic fantasy often neglects. The Riddlemaster of Hed  is a great example of this. The main character is a prince, yes, but in his kingdom that means he’s sort of the head farmer. Within three pages, his sister is dumping sour milk on his head. The first page has the funniest, because most understated, description of a hangover that I’ve ever read.

And I will probably always be trying to ring that perfect note of mythical storytelling that Meredith Ann Pierce hits when she’s at her best.

Dooley: What is your most recent publication?

LeBoeuf: My short story “First Breath” is included in Ellen Datlow‘s recent anthology Blood and Other Cravings (Tor Books, September 2011). The anthology’s theme is vampirism, and how that concept covers a lot more than just your typical bloodsuckers. I’ve just heard that the anthology has been nominated for a Stoker award, as has Kaaron Warren‘s contribution to it, “All You Can Do is Breathe”. That’s fantastic news — that’s fantastic company to be keeping.

Dooley: What do you think has changed most about the writing life in the past fifty years?

LeBoeuf: I’m not sure I’m qualified to say, seeing as how I’ve only been alive about thirty-six of those years! Certainly the internet has wrought the changes I’m most grateful for: the ease of finding and joining in with science fiction, fantasy, and horror fandom communities, the simplicity of finding and submitting to markets online (not to mention the savings on postage!), the boom in the population of online publications while, equally wonderfully, print publications develop online content. And while the gap between author and fan was never truly insurmountable, it’s bridged by blogs and internet communities in a much more omnipresent and immediate way, I think. It’s kind of fantastic that I can go to Twitter and see my close friends and my favorite authors in the same timeline, and sometimes they’re talking to each other. For better or worse, the world has been made smaller. I think mostly it’s for the better.

I blog at NicoleJLeBoeuf.com, and the blog post summaries get automatically broadcast to my Twitter feed and my Facebook wall. Fifteen years ago, by contrast, I was putting excerpts up on a Geocities website which I hoped I could get more people looking at if I pasted a “webring” widget on the front page. Twenty years ago I was scanning misc.writing for submission calls and agonizing over my first email submission. Twenty-five years ago I was sending handwritten copies of short fiction to Cricket Magazine’s monthly contests. The rate of change has accelerated something drastic over my lifetime.

LeBoeuf: The writer who first comes to mind, Kelly Link, is generally not considered “horror,” but one of the things I find most fascinating about her stories is the way she identifies and magnifies small moments — everyday moments, even — of terror. She imbues mundane objects with uncanny echoes. Some of those echoes she doesn’t need to make up at all; they’re already there, in your life, waiting for a skilled storyteller to direct your attention to them. You could call “Pretty Monsters” a werewolf story, and werewolves are certainly classic elements of horror. But that would be doing a disservice to a story that uncovers the very human ways in which her characters are monsters. And while “The Specialist’s Hat” is at surface-level a haunted house story, the eeriness of the surroundings are foils to the eeriness of the way the characters pass points of no return almost without realizing it.

Dooley: What’s up next for Nicole J. LeBoeuf?

LeBoeuf: Roller derby. I’ve joined the Boulder County Bombers and they are wringing more physical effort out of me than I ever thought I possessed. Also, I’m falling down and getting bruised in interesting new ways. I’m not sure I’m any less scared of falling than I was at my first practice, but I’m getting better at trying scary moves despite the fear. It’s no Toilet of Doom, but then again, what is?

Thanks so much for answering my questions, Nicole. Best of luck with all your writing and roller derby endeavors. I’m pulling for Ellen Datlow, Kaaron Warren, you and the rest of your colleagues in bagging that Stoker. Women in Horror for the win!

9 Responses to The Many Flavors of Horror: An Interview with Nicole LeBoeuf